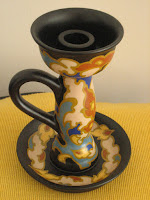 This is my first Regina item that I bought when visited an antic fair in Waterloo a month ago. This colorful candlestick are made by the Regina factory, one of the oldest Dutch pottery factory which was founded in 1898. The Regina name itself derived from Queen Wilhemina who was crowned in the same year. On the base of Regina pottery you will see the name of Regina, model number 298, the initial WB with a crown, the pattern name on the right "imbra", Gouda Holland and decorator mark. Then how do you know how old is it? 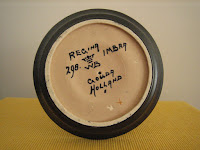 To make an estimation when this candlestick was produced by Regina factory, we can start from the crown logo on the base of pottery. According to Joop Nobel, one of the world's leading experts on Regina pottery, there are three types of crown:
- The first is the stencilled crown, it is not painted, thick and black filled.It is the oldest mark.
- The second is the so called "Gravenkroon" which is the type of crown an Earl would wear.
- The last type, after 1935, is the Keizerskroon" or Emperors crown. This mark had a cross on
top of it and was used until the factory closed in 1979.
Based on this three categories, since there is no a cross on top of the crown, we could guess that the crown on the base of candlestick could belong to the first and second type of crown. In this connection, we could estimate that this candlestick was produced before 1935.
Reffering to the pattern name, it seem that "imbra" is not a popular pattern name compared to Angola, Arina, Cordoba, Delos, Fleveo, Florida, Gambir, Molda, Myria, Olga, Presto, Robur, Ruimte, Sevilla, Tibon, Torino, Valencia. Then, I am really appreciated if you could add some information related to Gouda Regina pottery, particularly on the date of production as well as the pattern name "imbra".

Actually, Joop's published comments on dating via the base mark are oversimplistic and I suspect he has revised them. For a more precise interpretation please visit www.reginapottery.com and the "Marks" page.